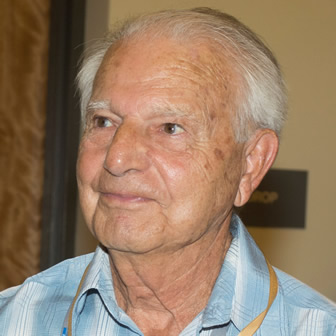 Pat went to and through various Naval Training Stations including Sampson, NY for boot camp; Great Lakes, IL for engineering school; Norfolk, VA outgoing unit and he was assigned to the USS Liddle D.E. 206 a destroyer escort in Charleston, SC.

The USS Liddle D.E. 206 escorted 3 round trips across the North Atlantic from NY City to Wales, England, Gibraltar, and Tunisia, Africa. Upon return to NY the Liddle was converted to a high speed transport and reclassified, APD 60, with 4 others, each to transport 200 troops, 1000 total.

The APD 60 joined the 7th Fleet in the Pacific and carried out 12 amphibious landings in the Philippines, Borneo, and Korea. In the battle for Leyte, USS Liddle/APD 60 was the first APD to be crash dived upon by a Japanese Kamikaze pilot in the Battle of Ormoc Bay on December 7, 1944. The Liddle splashed 5 of the attackers with her casualties reported to be, 37 killed and 42 wounded. The Liddle went on to San Francisco for repairs and returned to the Philippines.

After Japan surrendered, the USS Liddle aided in clearing Japanese mines from the shipping lanes of the Philippines and on to China.

I was a General Contractor in Rochester, New York and built custom homes from 1946-1957

I Moved to Homestead 1957 and worked in sales of Architectural products for new school construction.

I consulted with School Board Architects and the Superintendent of Miami School Board to upgrade existing Chalkboards, lockers, metal toilet partitions, etc.

In 1977, I formed a corporation named Constitutional Products Incorporated with my son Joseph Guggino to manufacture laminated plastic cabinets to Architectural Specifications for use in Schools and Institutions in Florida, Georgia, and Alabama.

I made the Honor Flight to the WW2 Memorial in 2012 with other Vets from South Florida.

I retired in 1986 and traveled extensively in the U.S.A. and in Europe with my wife of 69 years, Christina.