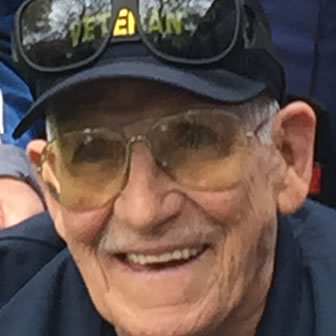 Owens B. Thomas joined the U.S. Navy the day after his 18th birthday, shortly after graduating from Hapeville High School in Atlanta, Georgia. He went through boot camp and radio school in Bainbridge, Maryland.

After going through the rigors of LST (Landing, Ship, Tank) training he was assigned to the tank landing ship USS LST-1027 which was commissioned on 7 June 1944 in Quincy, Massachusetts under the command of LT. Paul H Shropshire Jr.

His engraved memorial brick is part of the military veteran recognition program in Losner Park which is located in downtown Homestead, FL. OB was also the catalyst behind the extension of the Veteran Visitor program that now also acts as a clearing house and distribution center for used walking and mobility assistance devices.

Before OB passed, he asked that his walkers, wheelchair, and electric scooter be passed on FROM a veteran, TO a veteran FREE of charge – with their understanding and agreement that they do the same when the item is no longer needed.

Thank you OB for your generosity and thoughtfulness. RIP assured that your wishes are honored as you now are by those who knew you.