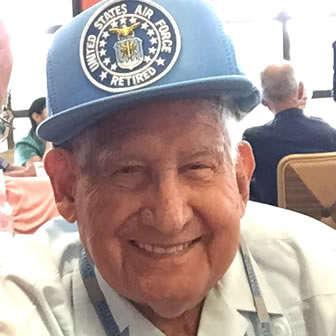 In 1936 Manuel Chavez was a member of the 120th Combat Engineers, 45th Division. He obtained the rank of Tech. Sgt. when the unit was called into active duty in Sept 1940 in preparation for WWII. During 1942 he was an aviation cadet and following graduation as a pilot and second lieutenant he was assigned to Boca Raton Army Airfield, Florida where he met and married Bernice Butler, a lovely Army Air Corps nurse.

By February 1945 he was promoted to Captain and attended Command and General Staff School.  During August 1945 he was transferred to the Pacific to join the 5th Air Force in the occupation of Japan as a pilot and Air Inspector of the 5th Air Force Service Command. After WWII ended he graduated from US Army Counterintelligence School and served in Puerto Rico and Panama as commander of CIC units. In April 1947 he was honored to be selected and appointed a Regular Officer in the grade of Captain, and in September he became a Regular Officer in the new United States Air Force. From 1950 to 1953 he served as Assistant Air Attaché to Central America while home based in Guatemala.

Numerous other Air Attaché assignments included Peru, Bolivia, Venezuela, Dominican Republic and Haiti. From 1960 to 1964 he was attached to the Miami CIA office during the Bay-of-Pigs invasion and the Cuban Missile Crisis. During that time he returned to the Dominican Republic on a 90 day TDY to assist the Consulate General in determining the position of the Dominican Armed Forces on the last days of the Trujillo dictatorship. During his last two years, before retirement after 29 years of military service, he was a counterinsurgency staff officer at the US Southern Command.