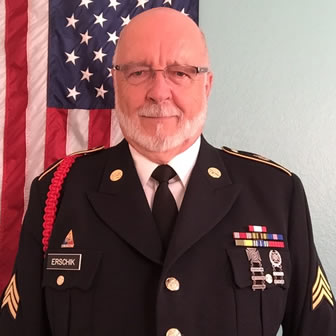 Richard Erschik was born in Chicago in April, 1945. He had an uncle (namesake) that served his country in the United States Navy. In his late teens, Richard lost his mother at her young age of 47 to the perils of cancer. Two years later, on October 25, 1965 he was inducted (drafted) into the United Stated Army and assigned military ID# US 55837218 during the major buildup of forces for the Vietnam War.

On that rainy morning he left his father and older sister in tears at Chicago’s Union Station as he boarded the bus for basic training in Ft. Knox, KY. The day after the bus arrived word spread that the Ft. Knox Army base was over loaded with inductees and recruits and everyone that arrived that day was being flown to Ft. Hood, TX where they were opening the base to basic training for the first time. Because Richard learned dismounted drill in (Lane Technical) high school he was designated a platoon leader and assigned the responsibly of leading 40+ new soldiers through the rigors of basic training, advanced individual training (AIT) and on to their first official military assignment in the 2nd Armored Division’s 1st Battalion, 3rd Artillery unit an 8″ self-propelled and towed howitzer unit.

As the Vietnam War rapidly escalated, so did the need for increased armament and firepower. So, Richard and half of his platoon, were transferred to A-Battery of the 1st Battalion 16th Artillery – better known as the Honest John Rocket unit, the largest free-flight artillery rocket weapon system in military service at the time. Due to his unique skill-set, Richard was not deployed to Vietnam. Instead, he excelled at training soldiers that were going to Vietnam in the art of self-defensive, hand-to-hand combat, and bayonet survival training. Because of his exemplary conduct and dedicated service, Richard advanced through the military ranks from PVT to NCO (Buck) SGT E-5 in only 16 months. On October 24, 1967 he decided to exercise his ETS (Expired Term of Service) in lieu of the Army’s offer to receive a brand new car and immediate promotion to SSGT E-6 if he would re-enlist.

Echoing many of those that served their country in its time of need, Richard often says that his 2-years in the Army were the most important and influential on his life. Richard went on in civilian life to excel in the business world as the founder of a nationally recognized and successful marketing services organization. Now in semi-retirement in S. Florida, he teaches individuals how to start their own business, or take their existing business to the next level. He is a nationally known speaker, educator and trainer in the trade show industry and very proud to be the founder and driving force behind this Veteran Visitor program to meet with and listen to past military personnel that want to share their incredible stories with others who understand and care.