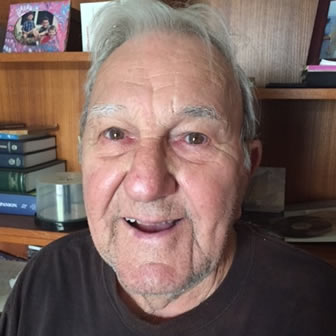 Helo was one of a more reserved veteran visited when it came to disclosure of details relating to his actual service time. But he was not at all without humor in his Navy remembrance of outrunning enemy submarines.

One of his Air Force memories involved the need for his fellow servicemen to just “figure things out” when it came to adaptation of devices used for necessary protection and aggression.

When it came time to increase armament on fighter planes he described his involvement in making a device to adapt a 20mm gun to the infrastructure of an airplane; and how everyone chipped in with various expertise. A piece of angle-iron here, a few nuts and bolts there, a quick test, a few adjustments, and it either serviced its purpose, or everyone started over.

As for the War effort, a typewritten CITATION that hangs on his wall describes and recognizes a sign-of-times with the following wording;

“For extraordinary heroism in the action against enemy forces in Atlantic Waters from November 1, 1942, to June 30, 1943; Operating PBY Amphibious Aircraft over North Atlantic and Artic waters off Iceland, Patrol Squadron EIGHT FOUR provided wide coverage of assigned areas and succeeded in sinking six enemy German submarines. With only rudimentary navigation facilities available, this squadron operated efficiently over icy waters and under extremely hazardous conditions of difficult terrain and severe weather, including ice, snow, as sleet and freezing rain prevailed in the area. By their courage, determination and outstanding performance of duty, these pilots and air servicemen not only caused severe losses to the enemy but also played an important role in the development of Iceland Air bases, thereby contributing greatly to Allies success in crushing the German submarine activities in the Atlantic. This gallant record of achievement in combat reflects the highest credit upon Patrol Squadron EIGHT FOUR and the United States Naval Service.” Signed (for the President) by Secretary of the Navy Francis P. Matthews.

On the same wall, for similar valor, hangs a Presidential Unit Citation award for his PATROL SQUADRON EIGHTY-FOUR, dated 29 August 1950.