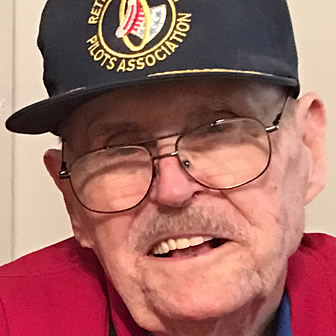 As he proudly stated from crystal clear memory when he was visited, Ed spent 5 years, 2 months, and 11 days in the Army including time as a POW.

U.S. bases of service included Fort Knox and Camp Dix as a motor pool Sgt. He spent most of his time in the service training soldiers as mechanics and understandably spoke little about his time as a POW.

He did, however, share that at the time of his POW release, his request for a peanut butter sandwich continues to be met today as his friends, loved ones, and associates that knew of his ordeal continue satisfying his request with the welcomed gift to which jelly has been added along the way.

Sgt. Highfill had the distinct honor and privilege of serving as a vehicle driver during WWII for none other than the infamous General George S. Patton who at his height of 6’-2” would sometimes lay inconspicuously prone in the backseat and tap Ed on the shoulders with his feet to indicate his preferred direction of travel.

After his time in the service Mr. Highfill went on to work for Eastern Airlines as a flight instructor, navigator, and eventually became a pilot of their Electra and 727 model aircraft for more than 30-years.

Today Ed resides in Homestead, Florida and shared his story of how in 1940, from December 2-24 he hitchhiked all the way from North Carolina to Miami and lived off of the coins the truck drives gave him along the way. “Sometimes they’d even let me sleep in the back” he said.