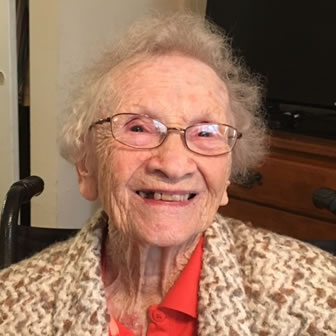 During her veteran visit, Dorothy beamed with some of the remembrances of her very active younger years. And while she didn’t serve IN the military, herself, she certainly contributed TO it as a very active and devoted volunteer in the USO.

The USO was founded in 1941 by Mary Ingraham in response to a request from President Franklin D. Roosevelt to provide morale and recreation services to U.S. uniformed military personnel. And that’s exactly what Dorothy did. Roosevelt was elected as the USO’s honorary chairman. This request brought together six civilian organizations: the Salvation Army, Young Men’s Christian Association (YMCA), Young Women’s Christian Association (YWCA), National Catholic Community Service, National Travelers Aid Association and the National Jewish Welfare Board. They were all brought together under one umbrella to support U.S. troops. Roosevelt said he wanted “these private organizations to handle the on-leave recreation of the men in the armed forces.”

According to historian Emily Yellin, “The government was to build the buildings and the USO was to raise private funds to carry out its main mission of boosting the morale of the military. Dorothy Brown played an integral part in seeing to it that our troops had an enjoyable time when they visited her USO in the 1940’s in the suburbs of Philadelphia, PA.

At 95 years old at the time of our veteran visit, she mostly recalled a lot of dancing and visits to the newly established and nearby Institute of Technology that was a huge hit to our soldiers interested in mechanics and science. When the war ended, she worked in a local bank for 7 years as a bookkeeper and remained in and around PA for most of her life.

A fall and fractured vertebra brought her to FL where the weather seems to be more tolerable for her than the snow she remembers back in PA. Her husband passed many years ago and their son is a retired Dade County police officer that tends to her needs today. She is an active watercolor artist and plays bingo regularly. It was truly a pleasure to meet her and enjoy the parts of her history she was able to recall.