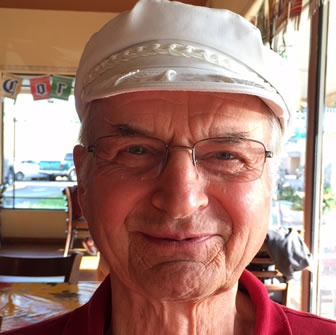 Don Schlegel never really left the Chicago area other than for his time in the Navy. At about age ten he had an urge to be underwater. He first attempted breathing 12” underwater through a garden hose attached to a float. For his 15th birthday he received his first real SCUBA equipment made from a surplus B-29 airplane breathing regulator. When he was 17, he joined a submarine reserve unit in Chicago and trained on the USS Silversides (SS-236) that never left the dock.

Some weekends the Navy would fly him to New London Connecticut to train on an operational submarine. Following 2-years of training, the Navy felt he was ready for active duty and flew him to Norfolk, VA to meet the USS Cubera (SS-347.) The Cubera was a remodeled WWII diesel sub that had less space than her predecessors, because she carried twice as many batteries for power. He was delighted to be on a working sub for 10-months.

Diesel subs served four meals a day to make up for unpleasant living conditions. Officers and enlisted personnel ate the same meals, usually lobster or steak just about every day. A lot of the sub’s maneuvers were classified SECRET.

Life on the submarine ranged from absolute boredom to controlled panic. Everyone did exactly what was required to get the sub to the surface. When everything was going well, duty watches were 4hrs on and 8hrs off.

Don was officially titled an electrician. On a diesel boat that meant he was in charge of all 504 battery cells each weighing a ton. If you were good at a particular job, sailors were given extra duties. He was good at his job, so in addition to electrical duties he stood sonar watches, he serviced as a look out, he was a spare parts petty officer for other electricians, and he was the Chaplain.

When a crew member’s mother wrote the Captain complaining her son did not have church services at sea, the Navy gave Don a minister’s license and because he did not drink or carouse in every port, he was assigned the position of the sub’s Chaplin.

At his time of discharge he was being paid $400/month including all benefits, while his first job out of the Navy paid him $300/month with no benefits.

Don spent a total of 6 years in the Navy. 2 years active reserve, 2 years on the sub, 2 years standby reserve. He married his high-school sweetheart and they are still together after 57 years.

After his military service Don worked for Johnson and Johnson as a Financial Controller until he retired at a young age of 44. He and his wife have 2 daughters and spend their time between their Chicago area home and Key Largo, FL. He belongs to a group of Ex Submariners that meet once a month to swap sea stories. They are active in volunteering at Veteran’s Hospitals, the Abraham Lincoln National Cemetery in Elwood Illinois, Boy Scouts and other worthwhile projects.