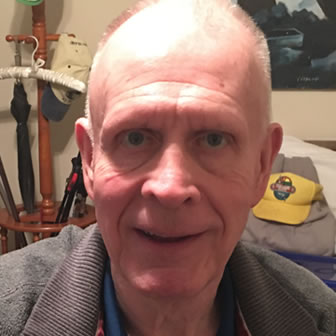 Although the first thing Donald did during his veteran visit was apologize for his onset of Parkinson’s disease as reason for his stuttering, his memory of his time served in the military was vivid.

Some of his recall included the fact that his friend joined the military the day after he did and went to Alaska. He never told Donald he was in until they both got out.

The first thing Don recalled and talked about was his PT (Physical Training) requirement during basic training at Lackland AFB in San Antonio, TX. He chuckled as he recalled the phrase “Remember the Alamo” because visiting the Alamo was a personal thrill while he was stationed there. He then recalled marching at night with a red light to illuminate the way, and went on to talk about the push-ups. Oh how he remembered the push-ups and the fact that if his T-shirt got any dirt on it during the push-ups, how he would have to do more.

For some reason, the standard obstacle course was not available during his basic training and the OIC’s (Officers In Charge) had to create one that was harder than the dedicated one.

Donald was trained in Illinois and became an accomplished welder, after which he was shipped off to the Strategic Air Command in Glasgow Montana where he worked on B52 bombers and bomb assembly. When he asked me if I ever heard of a Christmas tree I asked “do you mean the green ones?” He chuckled and went on to describe how B52’s lined up in a Christmas tree fashion for immediate and staggered takeoff to get airborne as fast as possible.

Although he never flew on the Air Force aircraft he repaired, years after his service, that included 16-months in the Philippines, he was awarded a medal by his congresswoman for his time served during military conflict. He recalled that while in Montana he played the card game Rook a lot with another SGT and his wife, saw every movie that came out, and bowled in 2 military leagues.

After the military he took advantage of the GI Bill and worked for a company in NY that made trash compactors. He later worked in Orlando for Disney as a greeter. Today, Donald lives in Homestead, Florida.