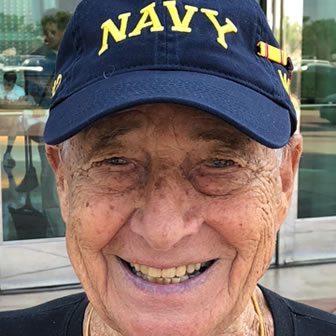 Concerned that he would be drafted, Arthur left high school at the end of his sophomore year to join the Navy in September 1943.

He went through the last boot camp training that was conducted in Newport, RI and attended Quarter Master school in Cardington, RI.

From there it was on to PT Boat training in Melville RI after which he was immediately shipped off to Oran, Africa and assigned to PT Boat 302 of Squadron 22 in the Mediterranean Sea.

During the time Rommel was fleeing from Africa, the mission of PT Boat 302 and 11 others was to totally guard and blockade against German shipping in the Genoa, Italy harbor.

Arthur described that it was much easier to observe and attack land targets from in close, than it was from far out at sea. And since they patrolled so close to land general quarters was sounded with a police whistle instead of the loud ships horns that would attract attention to the location of their PT Boat.

Arthur recalled one of the many humanitarian acts of kindness in which he and other sailors collected candy, so the kids in Cannes France would have and enjoy a memorable Christmas.

He also recalled his squadron finding a British warship in distress and sinking, from which they saved 26 lives before they had to cut the lines so the sinking ship would not pull their PT Boat down with it.

When the war ended, Squadron 22 was decommissioned and Arthur returned to high school to finish his education in 1948 at age 23. He then attended Harvard University where he studied Physics.

For 32 years, as a Department of Defense employee of General Electric in Lynn, MA Arthur was a pioneer in jet engine building and eventually a quality control chief.

He was always an entrepreneur and sold specialty combs that he manufactured in mass quantities and sold out of the trunk of his car.

In 2003 he sold the comb company and moved to Orlando, FL where he lives today.